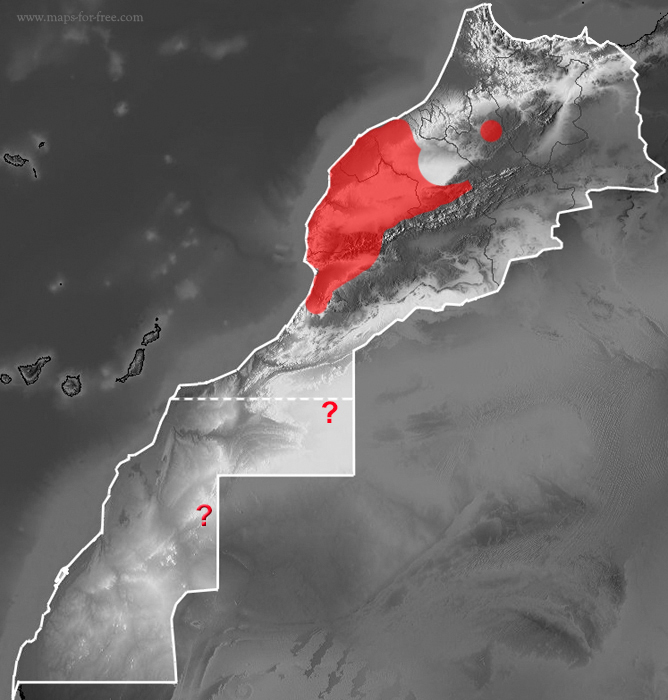 ?  Populations assigned provisionally to this species.

Photo gallery: 35 photographies (including photos of all the species described within Saurodactylus brosseti species complex). [ENTRAR]

Subsequently, its specific range was demonstrated by genetic analyzes (Rato & Harris, 2008), which also show that the allocation of this genus in the family Sphaerodactylidae Underwood, 1954 is not entirely clear and its taxonomic position is still highly uncertain.

The head is relatively large, undifferentiated from the neck, and has two large eyes with a vertical pupil. A more or less broad yellow line stands out on each side of the head, which in most individuals goes from the nostrils to the first third of the body, passing through the eyes as a “brow.” The supralabials and the throat are whitish.

The body is robust and composed of small, flat and smooth dorsal scales. In the dorsal part, small yellow-orange ocelli stand out. The ventral scales are white, large, hexagonal, rounded, and imbricate. 70-90 scales are counted around the central part of the body (Schleich et al., 1996). The extremities are relatively strong and lack adhesive sheets, adapted to the excavating habits of this species. The tail, yellowish-orange in color, has brown or brown spots.

The dorsal coloration is very variable: shades of orange, gray-brown or dark brown on which small ocelli stand out, most of them arranged in 2 longitudinal lines. The dorsal and caudal pigmentation is markedly separated at the base of the tail. The coloration has been described as having a marked sexual character: males are dark brown with golden dots, females are light brown to gray (Schleich et al., 1996).

It is a species very adapted to extremely arid areas, and is able to withstand heat, drought and hunger for several months. It has been found under small stones even in the hottest months and when the ambient temperature exceeded 40º. Under these it finds the necessary humidity to survive and avoids most of its predators (Meek, 2008).

It is active before dawn and during twilight (Schleich et al., 1996).

Patterns of social behavior have been described, the most frequent signs being arching the back, raising and waving the tail. The threatening gesture can be frontal or lateral (Schleich et al., 1996).

This species is a fierce predator in relation to its size. This behavior can be interpreted as an adaptation to the arid environment. Prey on small insects and arachnids (Schleich et al., 1996).

From May to September, laying can occur every 4 weeks, consisting of 1 egg. The egg is deposited at the end of a short tunnel in the ground made by themselves (Schleich et al., 1996).

Given its small size, it must be the prey of a multitude of small or medium-sized vertebrates. Predation data have been recorded for Malpolon monspessulanus and Macroprodon “cucullatus” (Schleich et al., 1996) and possibly scorpions (Meek, 2008). When he feels threatened, he tries to focus attention on his tail, with a different coloring than the rest of the body. It moves it quickly and begins to flee at high speed to a nearby refuge, being able to detach itself from the tail in case of being attacked by the predator. They can also shed skin fragments very easily, which could be due to a defensive mechanism similar to caudal autonomy.

It´s probably an endemic of Morocco, inhabits from El Jadida and Azilal in the north, to Agadir, and possibly Tiznit to the south, including the entire Souss valley.

It lives in open fields and agriculture fields, under stones or in the roots of plants. It is common in natural areas but also in areas altered by man as cultivation fields and is very frequent in plantations of Opuntia ficus-indica Linnaeus, 1768.

It is a very common species in its range, which does not seem to present conservation problems (Least Concern; LC; Joger et al., 2006).