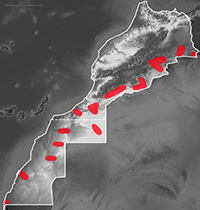 The five species of Western Palearctic Varanus are divided into 3 subgenus: Polydaedalus, which includes afro tropical species V. niloticus and V. yemenensis; Psammosaurus, with the Palearctic V. griseus; and Empagusia, distributed on the Indomalaya zone and includes V. bengalensis and V. flavescens (Sindaco and Jeremcenko, 2008).

Its head is covered in small granular scales with its characteristic depressed and pointed snout; the nostrils are much nearer its eyes than the tip of its snout, it has slightly visible eardrums and it has a long-neck. 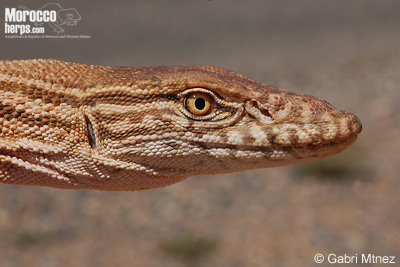 Its body is elongated and relatively skinny, making it easier to penetrate into galleries tracking down its preys. Grey monitor´s limbs are well developed. It walks by wavy and slow movements which change to lineal movements when it runs, getting really high speed if situation required it. Its fingers are short in proportion to the size of its limbs. Dorsal scales are round shaped, generally surrounded by granular scale rings, having between 134 to 169 bands of scales. The coloration is yellow in the ventral zone and it has between 110 to 125 cross-sectional bands of small square-shaped scales, from the neck to the cloaca. Caudal scales are somehow keel-shaped; it does not have a caudal crest. Male and female have up to 5 preanal pores at each side (Schleich et al., 1996). Its long tail is between the 131 to 146% of the Grey monitor total length (Mertens, 1954).

Coloration goes from yellow to gray, getting darker in older specimens. It seems that coloration depends on the soil where the monitor lives. Mertens (1954) distinguished between the subspecies of V. griseus largely on the basis of pattern, having from 5 to 8 narrow gray bands on the back and from 19 to 28 bands on the tail, which extend almost to the tip. 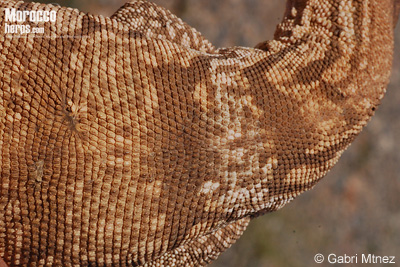 Data regarding the weight and size -described by Stanner and Mendelssohn (1987)- to distinguish males from females are not reliable at all, and hence is necessary to look for hemipenes in order to determine their sex (Schleich et al., 1996; Ibrahim, 2000).

It is a diurnal reptile which has been found in very few occasions at dawn or at night-time. (Schleich et al., 1996). It develops its main activity on terrestrial areas even though it has been rarely found swimming as well. (Omar Attum in Baha el Din, 2006).

On the Sinai Peninsula this specimen hibernates from October or November to March or April (Ibrahim, 2000), which might be essential for those specimens located in the North of Africa (Schleich et al., 1996). While in April, May and October it seems to present a unimodal pattern of activity, in the months of high temperatures, from June to September, it avoids the central hours of the day and develops its activity at sunrise and nightfall. (Schleich et al., 1996).

In Alger and Tunisia the breeding or mating season takes place during the months of May and June. The weight in females can be reduced in a 47% after the egg-laying cycle (Schleich et al., 1996), they lay between 5-12 eggs (Aymerich, 2012) Female rest close to the area where their eggs have been laid (Thilenius and Schleich et al., 1996). Hatching occurs in autumn, when juvenile specimens are about 20 cm long, taking from 3 to 5 years to attain their sexual maturity (Schleich et al., 1996; Aymerich, 2012). Researches made with specimens in Negev show that females hibernate later than males, probably due to their need to accumulate fat, not only for their hibernation period but also for having the capacity of producing the energy to lay eggs during the next breeding season.

It can expend most of the time searching food and hence covering long distances (Stanner and Mendelssohn, 1986; 1987; Baha el Din, 2006). The diet varies enormously depending on its habitat and can be formed by the totality of preys it is able to eat: saurian, snakes, birds nesting on the ground, eggs of all these animals, amphibians, mammals like gerbils, young rabbits, invertebrates… (Stanner and Mendelssohn, 1986; 1987; Bennett, 1995). A Gray Monitor was found dead in Mauritania as it was trying to swallow a great Uromastix lizard (Photo taken by P. Lluch and Geniez et al., 2004) and it has also be seen in Egypt trying to predate on Uromastix aegyptus of similar size from head to tail (Baha el Din, 2006). Saurians and snakes are the main prey for V. griseus in Alger (Schleich et al., 1996). Juvenile monitors are cited as prey for some snakes where as adult Varanus are cited as snake predators (i.e. Cerastes cerastes). According to some traditional Saharan stories, of doubtfully credibility, Varanus can survive to snake bites (Spatz and Schleich et al., 1996) because of its habit of feeding with some plants (Pergularia tomentosa) which could act as antidote.

Gray Monitor is prey for many mammals as foxes (Vulpes zerda), Hyenas (Hyaena hyaena) and cats (Felis margarita) (Mallon et al., 2011; Aymerich, 2012). In a dangerous situation against a predator, the monitor tries to run away towards the nearest hole. In case of being cornered, the monitor opens its mouth and snorts as it swipes with the tail its predator to dissuade it. If it beats its predator it could poison it through its saliva (Arbuckle, 2009) while it is not harmful for the human being (Schleich et al., 1996).

In Morocco it is not a common species though is widely distributed, covering all the Saharan region except Ouarzazate (Bons and Geniez, 1996), in all the different habitats: dune formations (Merzouga-Erfoud, Mhamid,…), oueds -ephemeral rivers- steppe and areas where the earth is soft enough to dig their galleries and also find their prey (Tantan, Bouarfa,…) and regs -rocky areas- (Assa, Icht…).

This saurian has been found drowned in wells and also, due to the long distance they do is a main victim in roads by traffic, even though its worst enemy is still the human being (Aymerich, 2012). Regardless the fact of being cited on the CITES (appendix 1) protected species, it is still captured for food, amusement or superstition, already considered a rare animal in Morocco almost endangered (Pleguezuelos et al., 2010) despite the abundance of potential and favorable habitats. As the majority of species of its genus is one of the most desired animals in the terrarium keeping market. Lack of this species is mainly generated by humans being more commonly seen in Western Saharan depopulated areas (Escoriza et al., 2011; Aymerich, 2012), where it is considered “out of danger and little known” (LR-lc; Geniez et al., 2004).”

To cite this page: