Standard-size lizard, being one of the species that reaches longer total length within the genus Acanthodactylus; males are around 250 mm while females are around 205 mm (Schleich et al., 1996; Geniez et al., 2004). It usually has 4 supraoculars, a line of small granular scales penetrating between the third and the fourth supraocular generally shows up between the supraoculars and the supraciliaris. It usually has 4 supralabials preceding the infraocular. Scales preceding the ear show denticular shape. 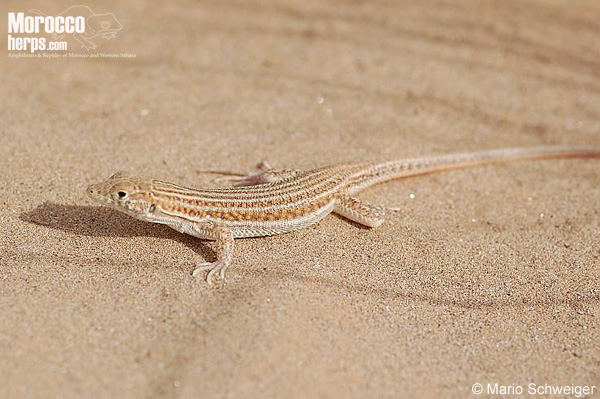 Like others species within the genus, scales from the temporal region get gradually smaller toward the parietal region. There are 32 to 40 lines of dorsal scales in half of the body, being keeled and overlapping each other, growing in size and getting more prominent toward both the posterior part of the body and the base of the tail. Costal scales are granular. Ventral scales are wide and placed in 10 longitudinal bands, rarely 12 or 14; the number of femoral pores ranges from 19 to 26 (Schleich et al., 1996). 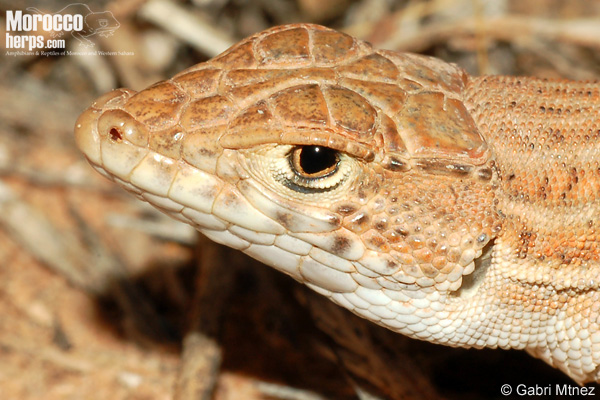 It presents earthy coloration, frequently adapted to the environment, appearing different tonalities of beige, grey, brownish-gray, brown or dun orangey. The design is reduced either to greyish or to off-white longitudinal lines series, usually 7, which are commonly much more evident in juveniles than in adults. Sometimes the central line shows up as fragmented but other times lines are insignificant or form a different pattern. Extremities generally show irregular patches; ventral coloration is white. Unlike other Acanthodactylus species cohabiting this area, juveniles of A. boskianus show reddish tail, individuals with blue coloration have been exceptionally observed (Geniez et al., 2004). Nonetheless, that blue tail coloration was described for populations belonging to the nominal subspecies present in Egypt (Baha El Din, 2006). This author also pointed out that blue coloration predominates against red one in juveniles belonging to the subspecies asper (Audouin, 1829). However, although this subspecies was identified in Morocco by Pasteur and Bons, it is not currently recognized according to Salvador (1982), leading A. boskianus to be considered as a monotypic species (Geniez et al., 2004). 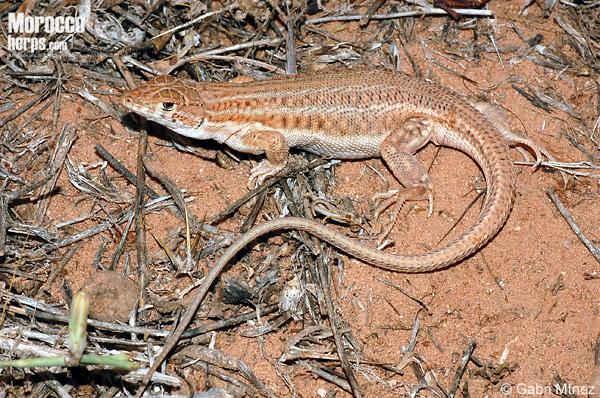 It is eminently terrestrial. It digs burrows, frequently with several entries, either in sandy but compact land or below the roots of a shrub.

In case of danger runs at high speed, usually zigzagging, toward either its hole or any nearby refuge. It is active during the whole year in the most thermophilic areas of its distribution, but shows a winter dormancy period extending from October to March somewhere else. During this period, it is possible to find some individuals sunning themselves in favourable days, usually juveniles. There are some twilight records (Stemmler & Hotz, 1972).

In the Oran’s region, first neonates appear in July, therefore the mating period must be between April and June. It seems that females are sexually matures when reaching a head-body length of 54.5 mm; clutch size varies according to female body size, extending from 2 to 7 eggs; the incubation period ranges between 89 to 100 days at around 28ºC; the body measurements of a neonate from the southwester of Morocco were 33 mm head-body length and 105 mm total length (Schleich et al., 1996).

Its diet is mainly based on insects, but arachnids and juveniles of Tropiocolotes sp. have also been referenced. Burmeister analysed the content of an excrement from the south of Morocco, finding out that it was composed of 60% of Hymenoptera -chiefly Formicidae-, 35% of Hemiptera and 5% of Coleoptera (Scheilch et al., 1996) .

It mainly inhabits arid and semiarid regions, reaching the northeaster coast through the Muluya’s depression. It is considered as the only unubiquitous saharan member within the moroccan herpetofauna (Bons & Geniez, 1996). It mainly inhabits flat terrains with scattered bushes and no tree layer. It can be found in coastal dunes and other not excessively vast sandy formations with little vegetation and close to regs, bed of oueds, nearby oasis and desertic steppes (Fahd & Pleguezuelos, 1996; Geniez et al., 2004). 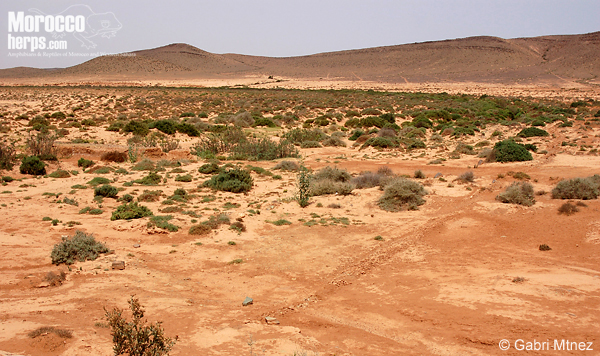 It is considered as an abundant species in most of its range.