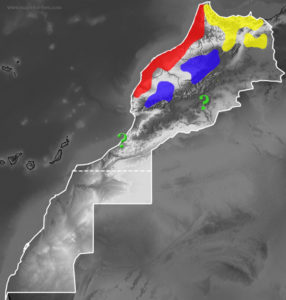 ?  A. erythrurus pending to confirm identification

Map of distribution of
Acanthodactylus erythrurus
in Morocco.

On the other hand, in 1982, Salvador in an exhaustive work on the Acanthodactylus genus, determined that in Morocco there are two subspecies: belli and lineomaculatus, and probably that the ssp. atlanticus should have affected as an intermediate population between both. Another different work also concludes that there has been no prolonged isolation in lineomaculatus when examining several individuals with intermediate characteristics between lineomaculatus and atlanticus in the Marrakech region (Slimani and Roux, 1994).

Afterwards, genetic analyzes have shown that there has been no prolonged isolation in the coastal areas between Tangier and Cape Rhir that supports the specific or subspecific range of lineomaculatus (confirming the work of Harris et al., 2004), as well as that there has been recent genetic flow between “atlanticus” and “belli” that suggests that the morphological differences are simple adaptations to different habitats. On the other hand, individuals of Jebel Sirwa are genetically more similar to the Algerian populations and to A. blanci than to those of the north areas of the Moroccan High Atlas (as is the case with the genus Podarcis; Pinho et al., 2008). The complexity of the results has led the authors of that work to suggest two alternatives to solve this taxonomic problem: to include all species (A. erythrurus, A. lineomaculatus and A. blanci) in a single species with high genetic and wide distribution or group the three species under the term “A. erythrurus species complex” awaiting further investigation (Fonseca et al., 2009).

Lizard of medium size, reaching a maximum size of 227 mm. It has a relatively large head with a rounded (belli) or pointed (lineomaculatus) muzzle. It generally has two long supraoculars (the second and the third) and two fragmented (the first and the fourth), existing between these and the supraciliars one or rarely two rows of small granular scales (Schleich et al., 1996). The atlanticus form is characterized by a small scale that separates the subocular scale from the mouth (Salvador, 1982).

The body has a robust appearance, slimmer in the Atlantic coastal populations north of Cape Rhir (lineomaculatus) and more stocky in the rest. The dorsal scales are strongly faired in the lineomaculatus, even in the nape of the neck, while in the rest of the populations the dorsal scales are not or slightly faired, especially in the anterior half of the body (Bons and Geniez, 1996).

It has earthy and grayish colorations, often adapted to the substrate in which it lives. On the background color intermittent longitudinal lines of light color stand out. Between these lines there are usually black marks alternating with light dots or marks. On the sides of the populations of the Atlantic coast north of Cape Rhir (lineomaculatus) blue or green ocelli can be seen.

They differ from the rest of lizards of the Acanthodactylus genus by presenting three complete series of scales along the fingers, by having small scales on the back and because the lower part of the tail is bright red in juveniles and subadults (Bons and Geniez, 1996). The reddish coloration of the tail is maintained in adult females (Schleich et al., 1996). To distinguish it of A. montanus or A. lacrymae is essential to check the distribution maps, and for the possible contact zones is recommended to take a sample after obtaining the correspondings permits.

It is an eminently terrestrial species that nevertheless hides and moves very quickly through palm hearts and other thick bushes. As a refuge it hides under cork oak barks, stones and other flat surfaces although as a general rule it digs a hole in sandy but compact terrain or between the roots of the bushes.

It can be active throughout the year, although in areas with cold winters it shows a period of winter slumber or decreased activity that can go from November to February. Even during this period, observations of individuals sunning on warm days can occur (Schleich et al., 1996).

The copulation is carried out in the months of May-June. Larger females may have a second breeding period in July. The clutches have 1 to 8 eggs and hatchings occur in July and August (Schleich et al., 1996; Slimani et al., 2009).

Their diet is basically made up of invertebrates, also citing some small lacertids. In studies with specimens from the south of the Iberian peninsula it was found that they also fed on plant matter, especially females (Schleich et al., 1996).

Among its predators there must be many species of snakes with which it shares habitats (Malpolon monspessulanus, Hemorrhois hippocrepis, Macroprotodon brevis, etc …), birds (raptors and wading birds) and carnivorous mammals. Its main defense mechanism is running fast. It travels at high speed and hides quickly when it becomes aware of danger. In case of being captured, it may suffer tail autonomy

Acanthodactylus erythrurus has a wide distribution in the Iberian Peninsula, Morocco and north of Argelia and Tunisia. In Morocco is a common species north of the High Atlas. South of these mountains there are only few records in Sidi Ifni, Oued Noun, Jebel Sirwa, Ouarzazate and Jebel Saghro (Bons & Geniez, 1996), many of which are now considered new species (Miralles et al., 2020).

It occupies all the Moroccan domains, although it is less frequent in the arid and the Saharan (Bons & Geniez, 1996). It inhabits a large number of habitats: plains with scattered scrub, coastal dunes, stony sides or cork oak forests, among others

According to the IUCN criteria,  A. erythrurus is in a conservation status of  “Least Concern” (LC: Slimani et al., 2009).