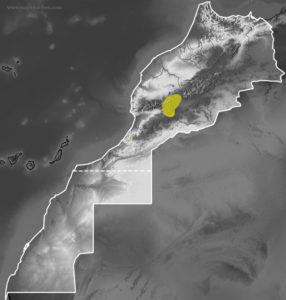 Morphologically, taxonomic discussions within red-tailed lizards (Acanthodactylus erythrurus s.l.) in Morocco have always been focused on populations north of the High Atlas. However, the realization of genetic analyses revealed the enormous isolation that existed in the individuals of Jebel Sirwa with those of the rest of Morocco, being genetically more similar to the Algerian populations and to A. blanci than to those in the north of the Moroccan High Atlas (Fonseca et al., 2009).

Recent studies have elevated this Jebel Sirwa population to the rank of species: Acanthodactylus montanus, which also seems to occupy in Tizi n’Tichka and probably the western parts of the High Atlas (Miralles et al., 2020).

Lizard of medium size, reaching a maximum size of 227 mm. It has a relatively large head with a rounded snout. The authors that described the species (Miralles et al., 2020) propose the following description:

The body has a robust appearance, with a coloration similar to the other members of the Acanthodactylus erythrurus group.

Adults with dark brown coloration with lighter lines – beige – on the back and upper flanks and a better marked line on the lower flanks; There are irregular earthy brown markings on the back above the dark lines.

Juveniles with a very dark background color on which there are three continuous light lines (beige) on each side of the body.

They differ from the rest of the groups of lizards of the genus Acanthodactylus in that they present three complete series of scales along the fingers, because they have small scales on the back and because the lower part of the tail is bright red in juveniles and subadults. (Bons and Geniez, 1996). For morphological differences with A. erythrurus and A. lacrymae, it is convenient to look at the distributions and in case of possible contact area, try to get a sample for genetic analysis after the correspondent permission.

Like other lizards of the erythrurus group, it is an eminently terrestrial species that moves very quickly in earthy and sandy areas and among thick bushes.

Being a mountain species, it possibly has a period of winter dormancy or a decrease in activity that can go from November to February. Although possibly even during this period, observations of individuals sunbathing on warm days can occur. It can be seen active even during the months of July and August.

For reproduction, feeding and predator data, see the Acanthodactylus erythrurus file, as there are no data available on this species.

It is a Moroccan endemism, and currently only the populations of Jebel Sirwa (2,320 m) and Tizi N Tichka (2,176 m) have been genetically confirmed, although it is very possible that the populations of the erythrurus group between Taroudant and Tazenahkt and other montane areas of the Western High Atlas belong to this species, with a higher range between 1,800m-2,500m presumably (Miralles et al., 2020).

It occupies only mountain areas with a habitat made up of plains or earthy slopes with scattered stones and above all dense bushes that serve to hide and rest while waiting for prey during the hottest hours of the day when they do not want to receive direct sunlight.

Little is still known about this newly described species, which is why, according to IUCN criteria, A. montanus is in a “Data Deficient” state of conservation (DD: Miralles et al., 2020), although possibly given the abundance of these lizards in the areas where it has been located, may soon be included in the category of “Least Concern” (LC).