By Arlo Hinckley and Alberto Sánchez-Vialas 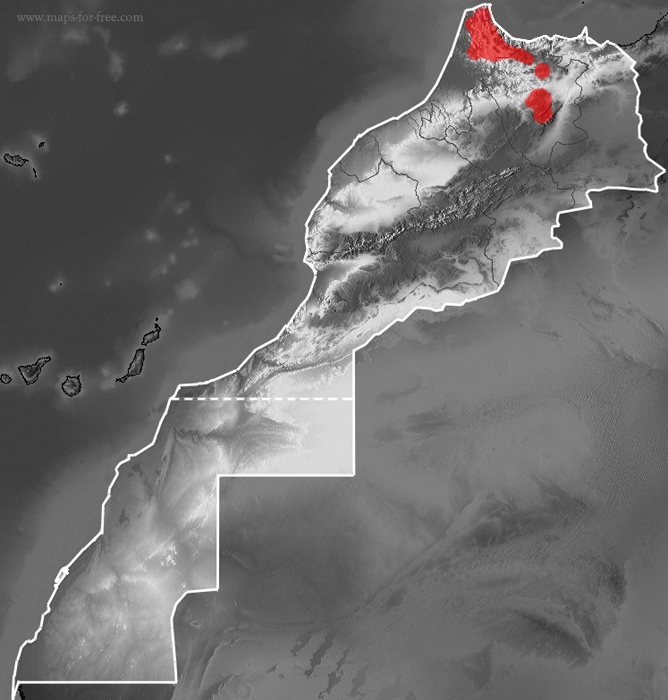 At a population level, Alytes maurus shows no strong genetic structure (based on mitochondrial DNA) possibly due to recent gene flow among populations. Their populations would have been connected during the last glacial maximum as a result of an increased climatic suitability for the species (de Pous et al. 2013).

Small and stocky frog with brownish, greenish or whitish dorsal colouration over which well defined black, green or brown spots might be present. Tiny orange dots in the body sides, parotoid glands and limbs might also be present. White ventral skin, sometimes with spots of grey on the throat and chest (Schleich et al 1996; Donaire-Barroso & Bogaerts, 2003; Escoriza & Ben Hassine, 2019).

Diagnosis: Not different in general morphology from the European species Alytes obstetricans but Salvador (1996) remarks that Alytes maurus is smaller, more slender, and with longer and thinner digits. The tadpoles have some distinctive features (Pasteur & Bons, 1962); Escoriza and Ben Hassine (2019) provide a detailed larval description and illustrations of several larval stages, including the oral disc, highlighting the labial tooth row formula.

The Moroccan midwife toad is terrestrial and nocturnal, it lives underground in rock crevices, caverns or under stones in mountain karst, mainly close to small streams.

Males call at dusk and during night, even when carrying eggs. The call is like a short whistle. Call parameters are within the range of variation of those of Alytes obstetricans, but are shorter in duration than those of Alytes cisternasii and Alytes dickhilleni (Márquez et al., 2011).

The breeding season varies among populations: calls have been heard at the beginning of February in the Tingitana Peninsula (authors pers. obs.) and from February and April in the western Rif Mountains (Donaire-Barroso & Bogaerts, 2003). Libis (1985) reported the calls in June and Bons (1967) between April and June.

It is the only North African anuran with a highly developed parental care: Alytes species have a courtship that involves male emitting advertisement calls to attract females and vocalizing females approaching the calling male. This is followed by an elaborate amplexus that occurs on land where males twine the strings with fertilized eggs around their ankles and carry them for about 3 weeks. Once the tadpoles internal gills are developed, the male proceeds into water, releasing the eggs which will hatch into tadpoles. Clutch size is around 25-30 eggs (Escoriza & Ben Hassine, 2019), with records such as 35 on a male found in Jbel Tazekka (1283 m a.s.l) and 60-70 in one from Jbel Ajnane (500 m a.s.l) (Donaire-Barroso & Bogaerts 2003; Márquez et al. 2011).

Alytes maurus is found in North Morocco in the Rif Mountains (where is located the type locality=Talassemtane) and in the Middle Atlas Mountains. In the Middle Atlas it seems to be limited to the Tazekka and Bouiblane Massifs. The altitudinal distribution ranges from 200 up to 2142 m a.s.l., with most of the observations localized at intermediate elevation (Donaire-Barroso & Bogaerts, 2003).

Although A. maurus was cited in Beni Snassen massif, their presence in this region has not been confirmed during different surveys performed in this area (Dinis et al., 2019; Escoriza & Ben Hassine, 2019). In north-western Algeria, the presence of this species is considered suitable according to the models of potential distributions (de Pous et al. 2013); however, no direct evidence of this species has been published for Algeria. Mateo et al. (2013) listed Alytes as part of the amphibian fauna of Algeria based on two adult conserved specimens which were incorrectly identified and labelled at the collection of the Asociación de Amigos de Doñana and some tadpoles sighted in Hafir Forest with sign of Chytridiomycosis. Most authors did not follow this record and excluded it from the amphibian fauna of Algeria (Escoriza & Ben Hassine, 2019) until more evidence was provided. In fact, recent surveys in Tlemcen by experienced local herpetologists have not detected this species (Khaled Merabet personal communication).

It is listed as Near Threatened (Donaire-Barroso et al., 2009). However, its limited distribution makes it highly vulnerable and might suppose a shift towards a more endangered status in the following years. Different studies agree on a negative trend for this species driven by the following threats: deforestation, invasive species, contamination of water, climate change and emergent diseases. In the Rif Mountains, peri-urban populations might suffer important declines due to a combination of water pollution, overgrazing, and introduction of Gambusia holbrooki (Mateo et al., 2003; Donaire-Barroso et al., 2009) In fact, Márquez et al. (2011), only recorded calling activity in one over seven known populations of Alytes during a five-year study. Size reduction of breeding sites due to human water extraction and a sharp decrease in larvae density point towards potential local extinctions in the nearby future. In the Tingitana Peninsula, some population’s reproductive habitats are highly polluted by littering (authors pers obs). Middle Atlas populations outside of protected areas are also subjected to similar threats such as cattle grazing, deforestation, canalization of mountain water, and soil erosion (Donaire-Barroso et al., 2006).  De Pous et al., (2013) showed that only about 7% of the distribution of A. maurus falls inside protected areas although many remaining populations are in areas so rugged that alteration is not imminent (Donaire-Barroso and Bogaerts, 2003). Finally, the devastating effects of the chytrid fungus (El Mouden et al., 2011) and climate change are two major drivers threatening populations within and outside protected areas. Rodriguez-Rodriguez et al. (2020) considered A. maurus a species with underestimated conservation priorities given that different climate change scenario models predicted a decline in suitable habitat.To sum up, the vulnerability of this species is possibly underestimated (Pleguezuelos et al., 2010; Mabrouki et al., 2019) and an increase in monitoring efforts should be performed to assess trends and conservation priorities (Slimani et al., 2010).