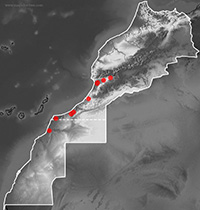 It is a non-poisonous snake, with aglyphus teeth.

It is its bright, smooth and iridescent coloration what turns this snake into a beautiful animal. Juvenile specimens are normally solid/plain black while adults are dark brown or grayish-brown which white ventral coloration normally is observed from ventral scales to those, more evident, located on the neck or labial scales (both infralabials and supralabials). The ventral scales are of pearly-white coloration.

The head is long, narrow and somehow is compressed at the dorsoventral area. The eyes are relatively big, with the same coloration as the body and they have elliptical or vertical pupils.

Regarding the sexual dimorphism, Schleich stated that female specimens have higher number of ventral scales (209-249) than males (192-230). However, female have less caudal scales (42-59) than males (56-75). Due to the hemipenes, a protrusion at the base of the tail can be observed in adults.

Both species have similar behavior of escaping when they feel threatened, however cobras may adopt their intimidating strategy by lifting and flattening the head and neck expanding the hood. Brown House Snakes do not show this passive-defense behavior.

It stays under its shelter during the day and at night-time it starts searching its preys actively. It uses the constriction to paralyze its preys before eating them. They feed mainly on small mammals (mice, shrews, etc.) (Trape and Mané, 2006) but they also feed on other reptiles, amphibians and birds (Schleich et al., 1996). When they live nearby populated areas they should be highly-valued animals as they control rodent plagues (Schleich et al., 1996).

When they feel threatened they try to escape but if they are captured they try to bite to defend themselves. However, it is a harmless species.

They are distributed from the coastal areas near Aoulouz and el Aaiún (Bons and Geniez, 1996). It is other example of tropical fauna, original from the South maintaining some specimens in the North West of Africa.

They live in arid areas near the Atlantic coast, flatlands with some bushes and Euphorbia, areas with dispersed trees and bushes, rocky areas, including habitats with no bushes at all. 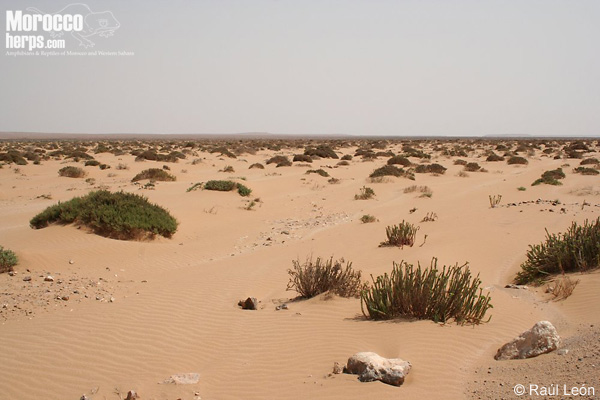 It is considered a rare species in the research area. As proposed by Geniez and Bons, these reptiles coming from more tropical regions should be urgently protected.

The main causes of mortality could be hit by cars and when they get inside some infrastructures-as pits or water reservoirs- from where they cannot leave; dying from drowning or starvation. It is relevant the number of specimens killed by people as well as captured for the trafficking and selling.