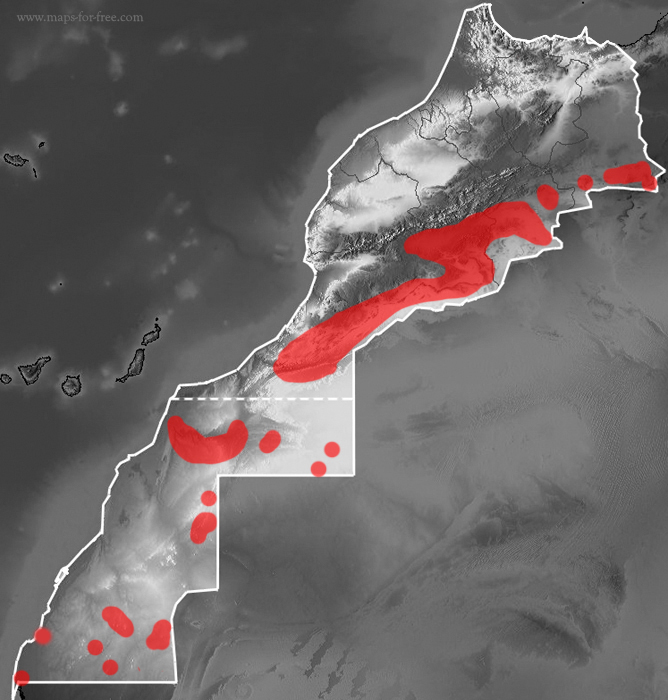 It is genetically more closely related to Cerastes gasperetti Leviton and Anderson, 1967 than to Cerastes vipera (Linnaeus, 1758) (Smid and Tolley 2019).

A phylogenetic analysis with samples of its entire distribution would be interesting to know the genetic variability of the entire species, including some of the populations that exist in most of the enormous Sahara Desert, the Sinai Peninsula, the western dunes of the Negev Desert and to confirm the validity of the subspecies C. c. hoofieni Werner and Siván in Werner et al. 1999, described for the populations of the southern Arabian peninsula, where the most widespread species is Cerastes gasperetti.

Viper of robust appearance, with short tail and triangular head, of medium size, its maximum length is usually approximately 60 cm, having found individuals of 85 cm in length. Its scales are heavily faired. The lateral scales are obliquely arranged, that is, they are arranged diagonally with respect to the dorsal body scales.

Wide head, well differentiated from the neck, with a short, rounded snout. Its eyes have a vertical pupil and are usually of a color similar to that of the body. On the head we see one of its most notorious characteristics, an elongated “horn-like” scale over each of its eyes. This morphological peculiarity gives the species its name. However, there are individuals, especially in certain parts of their distribution (Ouarzazate, Tazenakht, Agdz, etc.) who do not have these elongated scales on the eyes, in these cases being the so-called “mutila” morphotype (Martínez del Mármol et al ., 2019).

Varied coloration, they have usually a dorsal coloration similar to the substrate in which they live, which added to the texture of their body, gives it a very good camouflage on the ground. The color ranges from yellowish, sand color, light browns, grays to orange, reddish, pinkish, etc. From individuals with many spots to others with a smoother or more uniform coloration. On the base color, and depending on the individual, darker spots appear, which are often quadrangular, somewhat rounded or in the form of transverse bars, present both in the dorsal area, where they are larger, and on the side, where they are smaller and often less numerous. Some individuals show very striking and complex patterns, even with bluish lines and spots. Juvenile animals often have more striking and contrasting designs.

On the head, they usually show a dark post-ocular band (from the eye to the corner of the mouth). The tongue, especially in juveniles, can be tricolor (black, red, white).

Short tail, the tip of which can be dark, even black.

Its dentition is solenoglyphic, as in the rest of the Viperidae family, that is, it has two long, ribbed front fangs for the injection of venom into the prey it captures. Hemotoxic venom, with cytotoxic action (Gruber, U., 1993; Martínez del Mármol et al., 2019).

Most have horns that make it an unmistakable species. In the case of individuals without horns, with the species that could be most confused is Cerastes vipera, the location of the eyes being fundamental for the determination of the species, on the sides in Cerastes cerastes, and almost at the top of the head for Cerastes vipera (Martínez del Mármol et al., 2019).

Its activity is mainly nocturnal, especially during the warmer months, but it is also possible to observe individuals thermoregulating (often semi-hidden among rocks or in crevices) or active during the day, especially in the early hours of the morning (Gruber , U., 1993; Schleich et al., 1996; Martínez del Mármol et al., 2019). When the sun goes down, it leaves the refuge and moves with his particular side winding movements, leaving very characteristic marks on the sand, elongated and narrow, separated and parallel between them, very similar to those of the Avicena viper (Cerastes vipera).

Traces have been observed in the sand, due to the movements of this species, hundreds of meters in length, at dusk (B. Rebollo & R. León, pers. Obs.). And there are references to movements of more than half a kilometer in one night (Schleich et al., 1996)

Generally, their hunting strategy is on the prowl, ambushing between rocks, near vegetation, etc. to wait for the passage of a potential prey. We suppose that they must use the strategy called “caudal lure”, in which the snake being hidden, shakes its tail like a worm, to attract certain prey such as saurians or birds (this strategy is already known in other species of the genus; Heatwole and Davison 1976; Schweiger 2012). The color of the tip of the tail, is usually different from that of the rest of the body. They can spend a long time waiting for a prey to be close enough, at which point it strikes with a very rapid motion, and by biting the prey, it injects a dose of poison. Once the prey has succumbed, the snake begins to swallow it.

There are observations of a juvenile individual (following photograph), who remained in ambush position, totally immobile, throughout the night, camouflaged, with the tail of black color apparently prepared to be able to attract a prey, and several hours after dawn, continued in the same position (B. Rebollo & R. León, pers. obs.). It is also noted that it actively searches for prey (Schleich et al, 1996).

Its food spectrum ranges from small mammals and reptiles, to birds, and even invertebrates. Reptiles include saurians of the genera Ptyodactylus, Stenodactylus, Trapelus, small Uromastyx, Scincus, Acanthodactylus, Mesalina, small Varanus griseus, etc. Some case of ophidiophagy: predation of a Moila snake (Rhageris moilensis). Among birds some such as those of the genus Motacilla, Phylloscopus, Lanius, Ammomanes and Luscinia. Mammals of the genera Psammomys, Meriones and Gerbillus (Schleich, 1996) (.). Other minority genres would be Rattus and Mus (Schleich et al., 1996; Barnestein, et al., 2013;  G. Martínez del Mármol & R. León, Pers. Obs).

Among its predators are the European short-toed (Circaetus gallicus), an eagle specialized in ophidian predation, the desert hedgehog (Paraechinus aethiopicus), the Rüppell fox (Vulpex rueppelli), and among the reptiles, the desert monitor lizard (Varanus griseus).

Faced with a threat, the snake will try to go unnoticed, remaining motionless and trusting in its camouflage. If discovered, it will quickly flee to a shelter. If it has no other choice, and it has to deal with a predator, it will adopt a defensive position, in which it places the body in various “S” loops. It will puff up the body to simulate being larger, will snort and even graze with body movements, the scales on the sides of your body, heavily cowered, producing a well audible warning sound (stridulation). If necessary, it will take defensive bites. It is not uncommon for many species of vipers to make so-called dry bites, in which they bite as a warning or to try to save their lives in the face of a threat, but in which they do not inject venom (Chafiq et al., 2016). Its camouflage also serves to elude predators. It has the ability to bury itself by making coordinated movements of the body, to disappear under the sand.

In Morocco, it is present in many types of desert ecosystems, and is distributed throughout the pre-Saharan fringe and much of the Atlantic Sahara, but it avoids coastal areas and large dune formations, where it is absent or rare (Geniez et al ., 2004; Crochet et al., 2015; Martínez del Mármol et al., 2019).

Regarding its abundance, it is usually pointed out that it is surely one of the most common vipers in the desert areas of Morocco (Geniez et al., 2004; Martínez del Mármol et al., 2019).

Its threats and conservation problems are the same as those of many other small animals in its habitats. On the one hand, the loss or changes in their habitat due to infrastructure construction and other causes. Road accidents are very common, as well as the fall of numerous individuals in artificial traps such as water holes, pits or cisterns. The collection by both illegal traffic, to keep it as an exotic pet in terrariofilia, and by traditional snake hunters (Aïssaouas) to display them in shows, in town squares such as Marrakech, also represent a significant decrease in the populations of this species.