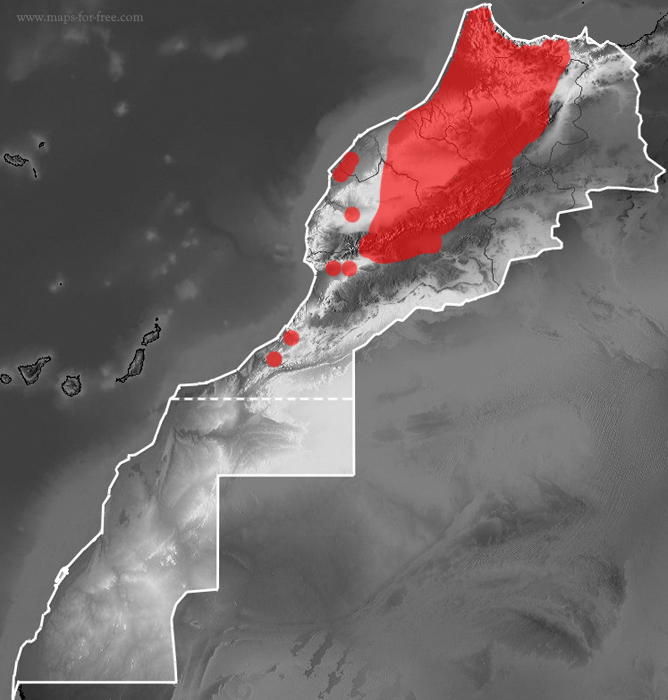 This Moroccan endemic species was considered a synonymy or subspecies of D. pictus (Boulenger, 1891; Lanza et al., 1986). However phylogenetic analysis showed that Discoglossus scovazzi must be considered a full species that is more related to Discoglossus galganoi/jeanneae (Iberian species) than to D. pictus (Martínez-Solano 2004; Biton et al., 2013).

The Moroccan painted frog is a medium sized amphibian with usually a snout-vent-length less than six cm, characterized by a smooth skin, small elongate warts, pointed snout and a characteristic pupil with an inverse drop shape.

These frogs have a high variability of colour patterns within the same population with  uniform, striped or spotted designs (Beukema et al., 2013). Basic coloration is cream and the striped or spotted phenotypes are characterized by darker stripes or rounded marks.

There are no morphological features to distinguish it from D. pictus (Martínez del Mármol et al., 2019) although in large specimens the head shape seems broader in D. pictus (personal subjective observation, D. Donaire). Apart from D. pictus it could be confused with Pelophylax saharicus for the inexpert eye, but one of the main ways to differentiate them is the tympanum, which is noticeable in P. saharicus and indistinc in D. scovazzi.  Also, very evident, are the two glandular folds along the dorsal sides of P. saharicus, while this fold is only present on the head and sides of the neck in D. scovazzi.

This is mainly a nocturnal species that can be sometimes found during daytime, usually around wetlands. Adults can be found active on the surface mostly during rainy periods between September and May, and probably aestivate in the driest and hottest months of the year.

According to Beukema and collaborators (2013) it is one of the first amphibians to reproduce in Morocco. The mating season begins with the winter rains, resulting in tadpoles in October-February and juveniles seen in June. We have  also seen juveniles in Kenitra at the end of August (pers. obs.). All the observations suggest that  this species can breed during almost the whole year as has been described  by Schleich and collaborators (1996) similar to D. pictus (Escoriza, 2015). The amplexus is inguinal and the males develop nuptial callosities during the mating season. Females lay a maximum of 1.000 eggs (Salvador et al., 2008).

They feed mostly on invertebrates and are preyed by Natrix maura.

In Kenitra we have observed many individuals of the bird Bubulcus ibis hunting in the shore of temporal lagoon where several juvenile of Discoglossus scovazzi were found. Tadpoles are preyed upon by Pleurodeles waltl (Escoriza & Ben Hassine, 2019) and likely by Salamandra algira larvae.

This species is considered an endemic of Morocco and the Spanish territory of Ceuta (Vences et al., 2014). The encroachment to the west of the Moulouya River by D. pictus indicates that D. scovazzi does not exist in Algeria. Any Algerian record of Discoglossus should be classified as D. pictus.

It has a wide distribution in Morocco with the following boundaries: in the east, the Moulouya Basin is the limit between this species and D. pictus. However, the latter enters west of the Moulouya River along the Mediterranean Coast at least until Melilla and Nador, although the two species might occur sympatrically at some sites within this region. A more detailed sampling  should be made in that area according to Vences and collaborators (2014). In the South, the High Atlas is the limit of their range except where it meets the Atlantic Coast. The species has been recorded several times in the Souss Valley and once in the Oued Draa (F. Cuzin in Bons & Geniez 1996). The latter was considered doubtful by Bons & Geniez (1996) possibly due to the great distance to the rest of populations. The recent finding of Discoglossus at Oued Noun, several kilometers north of Oued Draa  (García-Cardenete et al., 2019), revalidates that record, showing that the possible southwest limit for the genus Discoglossus could be the Oued Draa at least until 1992.

This species is adapted to almost all the aquatic habitats of Morocco up to  2.724 m in the high Atlas: From temporary ponds in the coastal dunes and forest, rivers, small mountain streams (Martínez del Mármol et al., 2019). It is one of the most common amphibians in  water sources around human areas and is present in flooded road ditches  and cattle tracks filled with water…

The Moroccan Painted Frog is one of the most common amphibians of North Morocco. Despite being affected by habitat destruction, it is one of the few species of Moroccan amphibians that can adapt quickly to  habitat changes. For example, we have found it several times in intensive agriculture fields between Fes and Karia Ba Mohamed (León Vigara R, Izagirre A, Vázquez Graña R, Martínez del Mármol G, unp. data). Mateo and collaborators (2003) cited the salinization of lagoons as one of the main threats. It is frequently killed by traffic on roads on rainy nights  and it has been found trapped several times in human structures such as pits, storm drains, wells, water channels and cisterns (Bab Taza, Kenitra, Ben Slimane, Fes, Taroudant; unp. data). It can carry the Chytrid fungus Batrachochytrium dendrobatidis (El Mouden et al., 2011). Apart from these threats, it continues to be very abundant so is considered by the IUCN as Least Concern (Salvador et al., 2008).

Thanks to Alberto Sánchez-Vialas for the permission to use his photos and information.