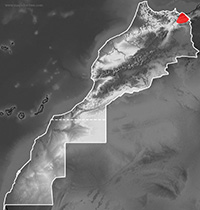 Macroprotodon abubakeri was described by Wade (2001), who partitioned this species from M. brevis based on morphological analyses of museum specimens. Due to the fact that most of these specimens were collected in the late 19th- early 20th century, much remains unknown about M. abubakeri. While the general taxonomic situation of North African Macroprotodon species currently remains ambiguous, the distinct identity of M. abubakeri was confirmed by Carranza et al. (2004) on the basis of mtDNA data. According to these analyses, the clade currently assigned to M. abubakeri is well-separated from the clade containing all other Macroprotodon species. Conclusively, both on morphological and mtDNA level M. abubakeri is a well-defined, but poorly known species.

A relatively small snake species, characterized by a head which is not well-separated from the body, and an upturned snout. Macroprotodon abubakeri presents four maxillary teeth. Four posterior infralabials are present in the majority of specimens. Usually 19 dorsals. Ventrals differ between males (154-175) and females (172-185), as do subcaudals (respectively 46-53 vs. 42-52) (Wade, 2001).

The dark nuchal collar is usually undivided. Postorbital streak is usually also undivided, in a way that it connects to the dark V-mark on the anterior of the head. Alternatively, individuals can show melanocephalism, in which a white streak can be present on the first 5 or so supralabials and another, oblique, occupying the upper part of the supralabials + the lower parts of the temporals extending from the eye to the corner of the mouth, or beyond (Wade, 2001).

Dorsal colour is light to dark brown (grey in preserved specimens), usually interspersed by small dark spots or stripes. The underside is light coloured, but chequered with dark brown or black squares.

Macroprotodon abubakeri can be distinguished from M. brevis by i) 4 posterior infralabials (vs. 3); ii) a lower amount of mid body scale rows (19 vs. 21-23); iii) 4 maxillary teeth (vs. 3); iv) postorbital streak usually connected to the ‘arms’ of the V-mark (vs. separated). The presence of a collar and lack of ‘textilis’ pattern distinguish M. abubakeri from M. cucullatus which occurs south of the distribution of the former in Morocco.

Macroprotodon abubakeri is a terrestrial species, which leads a cryptic life by spending considerable time under stones or other suitable shelters. Virtually nothing is known about the natural history of this species, as only very few live individuals have been documented up to date. Although the individual depicted in the current account was found under a stone in December (air temperature approximately 17 degrees), it did not appear to be hibernating concluded by its active responses. Individuals in the lower altitudes of the distribution are probably active year-round (but likely at different rates), while those occurring in mountainous regions might hibernating during irregular colder periods.

When caught, M. abubakeri will actively defend itself by flattening its body, and striking at the predator.

According to current knowledge, M. abubakeri occurs in Northeast Morocco, Northwestern Algeria and Spain (Melilla). Although the latter record is based on identification of a museum specimen (Wade, 2001) it is apparently in need of confirmation (Miras et al., 2012). In Morocco, this species can be found east of the Moulouya River, from coastal dune habitats up to the mountains of the Beni Snassen Massif (Wade, 2001). Although the Moulouya River probably acted as an historical barrier, M. abubakeri seems to have crossed this river westwards in several locations, such as Ras Kebdana (Ras el Ma). Whether M. abubakeri occurs sympatric with M. brevis in these areas or if the two species interbreed is not known. South of the Beni Snassen Massif, M. abubakeri is replaced by M. cf. cucullatus sensu Bons&Geniez (1996) (Wade, 2001). Within Algeria M. abubakeri occurs north of the Haut Plateaux in lowlands and within the Tell Atlas, westwards to at least Algiers.

Within its distribution, M. abubakeri can be regarded as a generalist species. Individuals can be encountered in coastal habitats (especially along eroded cliffs which provide sufficient shelter), rocky (semi)natural lowlands and hilly or mountainous terrain. The individual depicted in the current account was encountered along a well-vegetated hillside just west of the Moulouya River at 30 m a.s.l., littered with rocks. One of the sites described by Wade (2001) near Tafoughalt at nearly 900 m a.s.l. consist of a relatively dense pine forest with grassy undergrowth, again littered with rocks. Nothing is known about the abundance of M. abubakeri within its range, although the species is presumed to be common. The lack of knowledge on this species has led to an IUCN ‘Data Deficient’ status, which has not changes since its description (Miras et al., 2012).