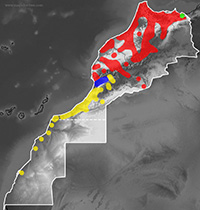 Large and strong snake of which the male can reach a bit more than 2 m of total length (i.e. including 18-22 % tail).

The head is elongate and slightly distinct from body, with a prominent prae- and supraocular region which gives it a fierce aspect. It has 8-9 supralabial scales, usually the 4th and 5th ones contacting the eye. The dentition is opisthoglyphous. 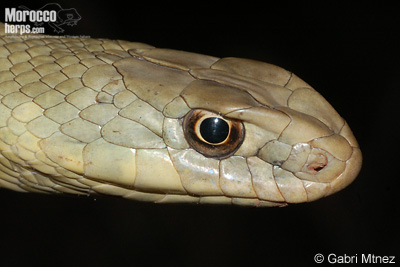 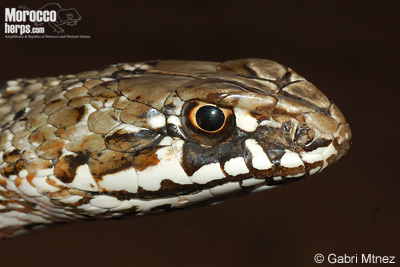 The body is stout (mostly adult males) or rather slender (females), covered by smooth, but slightly grooved dorsal scales which count 19 rows at midbody. The nominal subspecies has 171-199 ventral scales while M. m. saharatlanticus has 172-176 (Geniez et al., 2006). The tail is large and represents about one fourth of the total length in both sexes, one fifth in big adult males.

Males, growing to adults in 4-5 years, loose the juvenile coloration and pattern, while females maintain them more or less (De Haan, 1999). The most conspicuous feature of the adult male coloration is a dark area in the dorsum, called saddle. In the nominal subspecies this area starts two heads lengths behind the head and is 2-4 head lengths long; the rest of the body dorsum is uniformly greenish, ochre or brownish. The adult males of subspecies saharatlanticus present a big black dorso-lateral portion covering most of the dorsum with, however, a whitish dot on each dorsal scale. The intensity and extension of the saddle in this subspecies increase with the age (Geniez et al., 2006). The female and juvenile coloration consists in densely marbled dorsum with light and dark markings forming indistinct large stains. This pattern is more contrasted in females of M. m. saharatlanticus. The black saddle may appear in elder females. Each supralabial scale presents a light stain bordered with black. The ventral coloration in both sexes is generally white or yellowish with sometimes presents grey or blackish marks.

Coloration in both sexes of Northwest African Malpolon. Based in Geniez et al., 2006.

This species has the strongest sexual dimorphism among all Palaeartic snakes (Feriche et al., 1993). As shown above, adult male coloration is very characteristic in both subspecies. Furthermore, males have a relative longer head than females (Corti, 2001) and they reach bigger total lenghts: usually more than 2 m in males and rarely more than 1.40 m in females (De Haan, 2006). However, sexing some subadult specimens may be difficult because of the similar size of the tail, the difficulty when detecting externally the thin hemipenes (Feriche et al., 1993), the “adult male pattern” in some old females and the occasionally big size in some females (e.g.: 1.85 m in Guelmim, G. Martínez del Mármol, pers.obs.).

The only similar species it could be confused, is Malpolon insignitus. Males of this species have a uniform and paler coloration in the entire body, sometimes reddish, without black saddle or dark coloration on the flanks. Females and juveniles are more difficult to distinguish through coloration, as they also present a marbled pattern but usually forming a dark longitudinal stripe on the flanks. The number of ventral scales is lower: 171-199 in M. monspessulanus and 162-177 in M. insignitus (Geniez et al., 2006). One individual with intermediate morphological features between M. insignitus and M. monspessulanus was found in Saïdia (Geniez et al., 2006) suggesting the possibility of hybridation.

Montpellier snakes are terrestrial but can climb on trees or bushes and swim very quickly. They are diurnal, except in the hottest months, when they become crepuscular and nocturnal.

This species tolerates extreme dry places as other psammophids, in part thanks to the secretion of its nasal glands situated on each side of the head between eye and nostril. This secretion rich in lipids is spread by the snake on its belly and tail, forming a transparent film which prevents water loss (Dunson et al., 1978). Both Malpolon monspessulanus and Psammophis schokari have extremely low rates of evaporation compared to other snakes of the same habitats (Dunson et al., 1978; Lahav & Dmi’el, 1996). There are some evidences showing that the frequency of the rubbing behaviour in psammophids depends on external factors, decreasing when exposed to higher relative humidity or increasing when exposed to high temperatures (Brandstätter, 1996; De Pury, 2010). Rubbing behaviour has been observed both in juvenile and adult psammophids (Brandstätter, 1996).

The mating season is from April to June. Male combats and mate-guarding have been reported (Capula & Luiselli, 1997; De Haan, 1999). The evolutive reason of sexual size dimorphism on this species is that males tend to spend more resources growing in size, in order to increase the chances of winning other males in combats (Feriche et al., 2008). The clutch is laid in wet and sunny places, under any material with certain humidity such as big stones, logs, leaf litter, rubble or other animal burrows (Hailey, 1982; González de la Vega, 1988). The clutch size varies from 4 to 18 eggs, depending on the female length (Feriche, 1998; Feriche et al., 2008). Sometimes eggs or juveniles have been found in bigger groups, which suggest colonial nesting, maybe forced by the scarcity of cavities (Pleguezuelos, 2009). In Southern Spain, hatchlings have been reported in July-August (Feriche, 1998; Feriche et al., 2008).

Rubbing behaviour has been proposed to play an important role on sociability and reproduction of Malpolon monspessulanus. As these snakes move, some nasal secretion particles from the belly and tail are left behind. This could allow them to mark hunting routes, territories, nests and conspecifics (De Haan & Cluchier, 2006). During mating season this mechanism would imply that while a male performs mate-guarding, he marks chemically the surroundings to prevent other competitor males approaching his female. If intruding males are not immediately bitten away, ritual combats are performed to expel them away. Some of the losers may keep in the territory serving the dominant male as “vassals” defending his territory, while he is marking around (De Haan & Cluchier, 2006). The dominant male crawls on his dominated males and the female, spreading the secretion of his nasal gland. In this supposition of chemically-mediated social behaviour, the cloacal scent glands of females may also play a role (De Haan & Cluchier, 2006). Further research is necessary to confirm these hypotheses, but for the moment no experimental attempts obtained conclusive results (De Pury, 2010).

This snake is an active an opportunistic predator which hunts for the most common animals, usually looking for them in their refuges. When finding some, it bites them deeply and lengthily to inoculate its venom through its rear fangs as soon as possible. It maintains them by constriction until the venom shows its effects. Food spectrum changes following body size, but it usually includes fast-moving preys. In Morocco and Western Sahara, juveniles feed on small animals like skinks, lizards or invertebrates; while adults catch birds, snakes, mammals and big lizards (including Uromastyx nigriventris; M. Aymerich, pers. com.). Cannibalism has been reported out of the mating season (De Haan & Cluchier, 2006; Pleguezuelos, 2009). Sporadically they can eat dead animals (on the asphalt of a road; M. Aymerich, pers. com.).

Due to its abundance, it has many predators such as mammals (Herpestes ichneumon, Vulpes vulpes, Sus scrofa; Schleich et al., 1996; Pleguezuelos, 2009), birds of prey or Naja haje (J.A. Valverde, unpublished). It is always very alert monitoring the surroundings. Even when it is basking, it is usually on elevated places with a good visibility. When it moves actively, its forebody is typically raised and its head turning to all sides. As soon as it detects a potential predator, it normally escapes very fast. Sometimes, it may trust in its cryptic coloration (especially juveniles and some females) remaining motionless. If it is not able to flee, its threat behaviour consists in loud hiss, head enlargement, dorsoventral neck compression and forebody elevation while it tries to escape continuously. Bite to humans only happens while the snake is caught, and very rarely ends up in envenomation. It is very difficult to get poisoned because the dentition is opystoglyphous, so the venom is inoculated through the rear fangs and only if the bite is in a part of the body thin enough to be overwhelmed by the mouth of the snake, such as the hand or the arm. The reported symptoms are generally localized in the bitten area (swelling, oedema, temporal local paralysis), but one case showed more important difficulties with respiration and swallowing (Pleguezuelos, 2009).

The nominal subspecies, M. m. monspessulanus, is distributed in Northwest Italy, Southeast France, Iberian Peninsula and most of Morocco excepting eastern High Plateaus and South of Agadir. The subspecies saharatlanticus, is found in the Antiatlas Range and coastal areas from Tiznit in the North to Dakhla in the South. In Souss Valley and coastal areas between Agadir and Tiznit, the intermediate individuals are frequent (Bons & Geniez, 1996; Schleich et al., 1996; Geniez et al., 2004; 2006).

The eastern edge of its range is not clear. The oued Moulouya has been pointed as the limit between M. insignitus and M. monspessulanus (Fahd & Pleguezuelos, 2001). However this boundary is not valid for the Montpellier snake, as recent genetic analyses show its presence in Northwest Algeria (localities of El Aouedj and Chrea; Carranza et al., 2006).

This species occurs in most Mediterranean habitats in Morocco. In Saharan areas it is usually close to oueds and sandy areas with scarce vegetation full of mammal burrows, and punctually in regs and rocky areas. It is found from sea level up to 2160 m in the High Atlas Range (Martínez-Solano et al., 2008).

It is one of the most common snakes in Morocco (Bons & Geniez, 1996). Many individuals die on roads, others are captured by the Aissaoua and another reptile hunters and it is usually found fallen inside human infrastructures, like water holes, where it cannot go out. Besides these threats, it continues being very common and it is consideredas Least Concern (LC) globally (Martínez-Solano et al., 2008) and in Morocco and Western Sahara (Pleguezuelos et al., 2010). In the Western Sahara is considered very threatened by traffic road and the urban development in its habitat, limited to coastal areas (Geniez et al., 2004).

We thank Cornelius de Haan for helping us in the description section of this species.