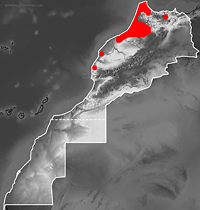 Molecular studies using mitochondrial haplotypes suggest the existence of two Pleurodeles waltl clades. One at centre, north and west part of the Iberian Peninsula, while the other one extends to Morocco and both south and east part of the Iberian Peninsula, appearing the Guadalquivir river as a rough line that separates both clades. Therefore, the haplotypes from Morocco also show up in both the Baetic System and the Spanish Mediterranean coast, which means that there have been dispersion processes across the Mediterranean sea (Batista et al., 2004; Carranza and Arnold, 2004).

The sharp-ribbed newt is a huge urodele that, even if might reach 31 cm long, does not usually exceed 20 cm long. The tail is laterally compressed and ranges between 46.3 and 55 % of the newt total length (González de la Vega, 1988). The head is broad and compressed while the eyes are small, prominent and placed slightly forward, being either brown or greyish and showing black round pupils. The snout is round and a gular fold appears on the throat.

The skin is rough and covered in lots of small tubercles ending in a black tip. It presents small caudal crests that get slightly more developed during the breeding season. The colouration is brown to olive-green, but depends on several environmental variables such as temperature or brightness. It shows either black or dark round marks at the dorsal part of the body. Lines of orangey tubercles appear on the lateral trunk sides. Front extremities present four fingers while back ones are longer and present five toes. The ventral part of the body is brighter than the dorsal one, showing beige-yellowish colouration and black dots.

Larvae are characterized by both big crests and highly developed gills that usually appear upwards. The tail ends pointed (while the tail of the other Moroccan urodele, the north African fire salamander (Salamandra algira), ends roundly).

That species typically inhabits temporal aquatic places. It mainly develops two types of lifes, aquatic and terrestrial. Individuals have been found taking refuge after their habitat dried up. In that case, they are only active during very wet nights, either going from their shelters to the ponds or remaining still on the pond shores. Terrestrial life, above all for adults individuals, seems to be a mandatory state in order to survive the drying of ponds, streams and small lakes. However, if the place does not totally dry up and remain suitable, the sharp-ribbed newts will carry out an entirely aquatic life (Hódar et al., 1993).

When the first autumnal rains come, the sharp-ribbed newts that took refuge from summer high temperatures will leave their terrestrial shelters (burrows, under stones, among tree roots…) to go to their breeding places. They are more agile inside water than out of it. It is possible to easily find them in shores and shallow places during night time, whereas it is more difficult to see them during day time, when they seem to remain in the deepest parts of ponds, streams and small lakes, either among the aquatic vegetation or under stones.

Mating takes place between October and April, when the winter rains come. If they are well nourished, juveniles will be sexually mature 6 months after the metamorphosis (Schleich et al., 1996). After female smell recognition, the male starts the courtship that consists of doing tail undulations. Later, the male goes under the female, holding her with his arms and placing her on his back. They may remain like that during several hours, even days. After that, the male lets go of one arm and turn around, stimulating the female and placing a spermatophore on the ground. This may happen up to 6 or 7 times. The female picks the spermatophores up off the ground by placing her cloaca on them (Schleich et al., 1996; Salvador, 2009). Up to 4 males might hold a single female, leading to the formation of a “mating ball”: http://www.flickr.com/photos/gabrimtnezmarmol/3813716981/

The ovoposition takes place between 24 and 48 hours after mating. Depending on the female both size and age, the number of eggs may range between 80 and 2000 (Schleich et al., 1996). The larvae development seems to be owed for some environmental factors such as water temperature and food availability. When the water level begins to decrease, larvae development will speed up to avoid dying.

Larvae and adults are highly voracious. The adult diet during the aquatic stage is based on fresh water invertebrates and, occasionally, invertebrates which fell into water, amphibians and their larvae, juvenile snakes and fishes. The larva diet is based on crustaceans and aquatic insect larvae (Salvador, 2009). Lots of bird species, several mammals and the viperine water snake (Natrix maura) appear among the sharp-ribbed newt predators (Salvador, 2009). When it is inside water, quickly flee from predators by swimming to dense aquatic plants or other kind of shelters. It is very clumsy on land, so its antipredator strategies vary according to individuals and environmental temperature. If they are highly active, some individuals, although clumsily, will persistently try to run away. In case of being cornered, sharp spines (rib tips) appear on the lateral trunk sides (more details in Heiss et al., 2010). Like most of the amphibians, it can secrete toxic or disgusting substances through skin glands. Those secretions can easily seep through its enemies either mucous membranes (e.g. eyes, nose or mouth) or wounds. Therefore, its sharply pointed ribs cannot only be used as hurting weapons but also to make substances penetration easier. Other kind of defensive behaviours are arching the back to look bigger, trying to bite, emitting sounds or, since the tail is not a vital part of the body, show it as a decoy (Schleich et al., 1996; Salvador, 2009; personal experiences).

It is a typical Mediterranean species that is mainly distributed in the area localized within the triangle Ceuta – Souk Jemëa des Uolad Abbou – Annoceur. It appears in the humid, the subhumid and the semiarid bioclimatic regions (Bons & Geniez, 1996). Since the mitochondrial haplotypes from Morocco are similar to the ones localized in both the Baetic System and the Spanish Mediterranean coast, the natural dispersion from Morocco has been called into question, suggesting anthropic introduction as a possibility (Carranza & Arnold, 2004). Nonetheless, both the haplotype diversity found in Morocco and the wide distribution of that species, point out a relatively recent natural colonization (Batista et al., 2004).

It is mainly abundant in stagnant places but less abundant in low current both rivers and streams. It can get used to live in high anthropic-altered places such as crop edges and human constructions such as reservoirs and wells.

This amphibian must be threatened with the aquatic habitat loss and the contamination of these places. This is getting more and more common within the study area, mainly in the north of Morocco. One of the worst enemies of the sharp-ribbed newt in the Iberian Peninsulae is the red swamp crayfish (Procambarus clarkii; Salvador, 2009). We have not had proof that this crayfish is acting as a serious problem for the sharp-ribbed newt in Morocco. However, it would be necessary the authorities to warn the population about the dangerousness of the introduction of this crayfish for the native amphibian species.

So far, it is known the introduction of the eastern mosquitofish (Gambusia holbrooki) in many of the sharp-ribbed newt breeding places (de Pous & Beukema, 2011). Although it is not known the impact of this fish on the newt populations, those voracious fishes maybe both competing and preying on newt eggs and larvae.