Four species are nowadays recognized in the genus Hemorrhois Boie, 1826: Hemorrhois hippocrepis (Linneo, 1758), Hemorrhois algirus (Jan, 1863), Hemorrhois nummifer (Reuss, 1834) and Hemorrhois ravergieri (Ménétries, 1832). These snakes are known for their colour pattern variability. The eastern species (H. nummifer and H. ravergieri) can even have designs that mimics the designs of the vipers of their same habitat. In other species is possible the change of the coloration with the age (H. algirus; Arnold & Burton, 1997; Baha el Din, 2006).

Only two species are known to occur in Morocco: H. algirus and H. hippocrepis (Bons & Geniez 1996) and the Maghreb.

H. hippocrepis is a large, thin and strong snake with big eyes, smooth scales and beautiful design based in rounded marks and a typical horseshoe mark in the head. It´s range covers the Iberian Peninsula, Morocco, Tunisia and some islands where it has been probably introduced recently (Sardinia, Balearic islands, etc…). It is one of the most common snakes in Morocco and occurs in the areas with Mediterranean clima north of the high Atlas chain, the Souss Valley reaching the south Atlantic coast until 20 Km north of Tan-tan (Bons & Geniez, 1996; Leon Vigara, 2012) and it has been recently found in Tendrara (B. Rebollo Fernandez & G. Martinez del Marmol, unpublished).

H. algirus is smaller and thiner than H. hippocrepis. It occurs in Morocco, Western Sahara, Mauritania, Algeria, Tunisia, Lybia, Egypt and Malta. In Morocco and Western Sahara is represented by the subspecies intermedius Werner, 1929 (Geniez et al., 2004), characterizated by a design of transversal bars along the body and horseshoe mark on the head following the original description of Werner (1929) but also by individuals with rounded blotches and horseshoe mark and grey-black headed individuals (Bons & Geniez, 1996). It occurs in a restricted distribution in Morocco limited to the Saharan zones (Bons & Geniez, 1996).

Although the specific rank of Hemorrhois algirus and Hemorrhois hippocrepis has been ascertained (Schatti & Utiger, 2001; Nagy et al., 2004; Carranza et al., 2006; Wuster et al., 2007), the number of samples used is very low (Schatti & Utiger used samples from Rabat, Agadir and “Morocco” for hippocrepis and a Tunisian sample for algirus; Nagy et al. used samples of Tantan plage for algirus and a spanish sample for hippocrepis; Carranza et al. used just one algirus sample from Tunisia and many hippocrepis samples but all of them from north of the Atlas Chain so no “intermediate” individuals were compared to “pure” algirus or hippocrepis and Wuster et als samples has no origin known), the distribution of both species it is not totally clear in contact areas between both species. Bons & Geniez (1996) mentioned the difficulty to identify some individuals from the Anti Atlas chain in Morocco. 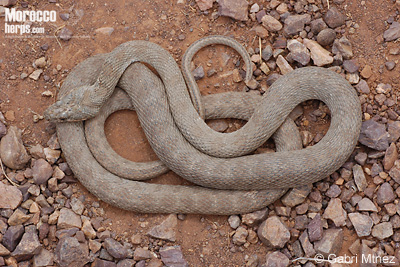 However this information contrast with Werner (1929), Bons & Geniez (1996) and Geniez (2004) who include some Hemorrhois individuals with horseshoe mark in H. algirus. In contrast, Sochurek (1979) described these specimens as a subspecies of H. hippocrepis and suggested the possibility of being a full species or a hybrid between H. algirus and H. hippocrepis. In fact, the Schleich et al.’s description agrees with the eastern form, H. a. algirus, but not with the western form, H. a. intermedius (including “Coluber algirus villiersi” Bons, 1962; Geniez et al., 2004) which can exhibit a horshoe mark and rounded blotches on the dorsum, and has rarely a dark headed colouration. Even in the eastern form, has been published the possibility of 27 rows of dorsal scales at midbody (in most Malta specimens; Bons in Joger, 1997). Le Berre (1989) published that Coluber florulentus (includying H. algirus) has between 21-25 rows of dorsal scales at midbody, whereas to Gruber (1993) and Baha el Din (2006) all specimens of Hemorrhois algirus have 25 rows.

In Morocco (including Atlantic Sahara), western Algeria and Mauritania, some specimens can have a horseshoe-mark and can have a design of transverse bars (fitting with the Werner´s description of Coluber algirus intermedius). But it is also possible to find Hemorrhois sp. with unicolour head and unbranded horseshoe mark but with circular markings similar to H. hippocrepis. Schatti (1986) argued that the distinction of two subspecies of the Algerian whip snake (algirus and intermedius) is not conclusive because reliable characters are lacking. 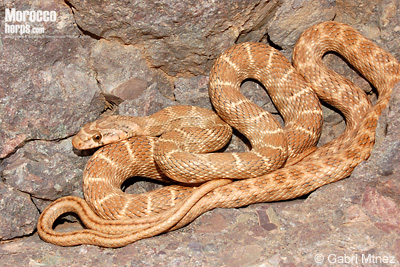 The extreme variability of individuals suggests some questions:

– Is it possible to group all these odd individuals in a subspecies of H. hippocrepis or H. algirus as it has been done historically with the subspecies “intermedius“?

– Would it be possible that in large areas of contact between both species hybridization has occurred and the so called subspecies “intermedius” is simply the product of a continuum hybridization zone of both Hemorrhois?

Although this could also be because most specimens with rounded blothches of the contact area could be automatically assigned to H. hippocrepis. But it seems very rare that Hemorrhois algirus has evolved with the horseshoe mark without any gene flow of H. hippocrepis although the presence of sympatric areas and “intermediate” individuals. 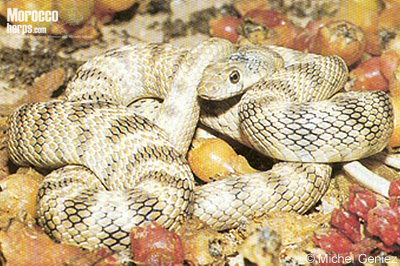 A genetic analysis with wide sampling (mostly “intermediate” and “strange” individuals) is madatory to clarify the taxonomical situation of this genus in Morocco.

2 Replies to “Taxonomic troubles in the Hemorrhois genus in Morocco”