This spring, despite the bad weather has been rich in interesting findings: Naja, Varanus, Telescopus, Dasypeltis, Myriopholis, Daboia, Echis… and that’s just the tip of the iceberg. Stay tuned for updates…

Sorry, this entry is only available in European Spanish.

The viper Echis leucogaster is probably the rarest and most hard to see snake in Morocco, where this species maintains a small number of relict populations.

Our friend Gabriel Martínez del Mármol, co-founder and member of the authors team of www.moroccoherps.com has traveled to Morocco in search of this elusive snake. And he has found not one … but two!

In the species section you can find the working file of Myriopholis algeriensis.

It is a surprising case of multiple convergent evolutions, to the fossorial apoda lizards, we have to add a family of strange fossorial snakes that look, yes… like worms.

The Leptotyphlopidae, whose only representative in Morocco and Western Sahara is Myriopholis algeriensis, although the family groups nearly one hundred species distributed in America, Africa and Asia, are real small size snakes that are extremely thin and have interesting adaptations to their way of life.

Little is known about the presence of Myriopholis algeriensis in Morocco and Western Sahara more than a few individual findings; however the difficulty in detecting this species could have contributed to this more than its real distribution and abundance.

In the species section you can find the working file of Bitis arietans.

The Puff Adder or monarub (Bitis arietans) is a hefty viper with a wide distribution in Africa that presents some relic populations in Morocco, of great interest, although greatly endangered. 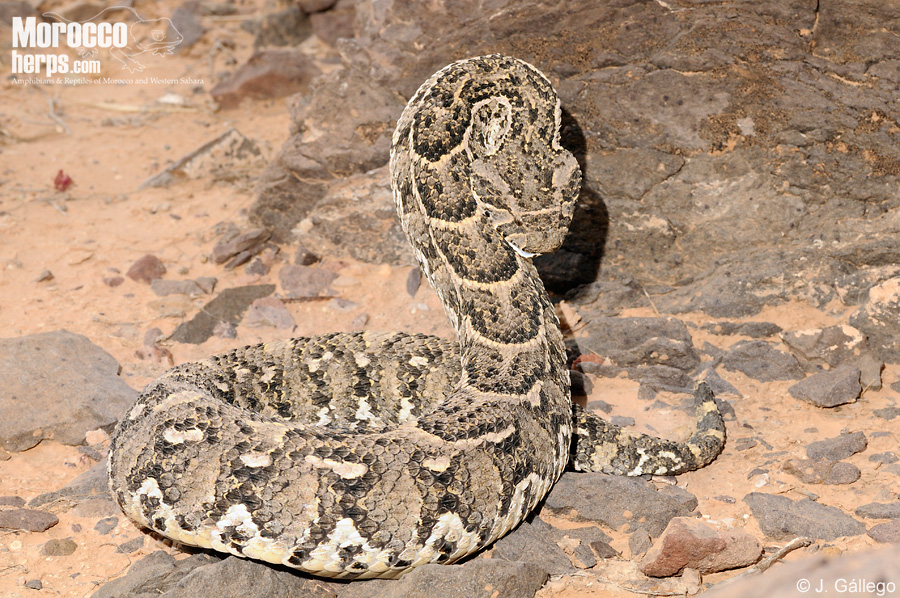 The run overs and  incontrolated captures to serve as tourist amusement in places like the Djemma El-Fna square is putting these populations close to their extintion.

When we travel to Marrakech or similar cities, we should remember that every coin we give to snake-charmers contributes to take two emblematic species, the Puff Adder from NW Africa and the Moroccan Black Cobra, a step closer to extinction.

If we ask the snake charmers, they will swear over the health of their children that they love the snakes and treat them like of their family, as they make a living of them. The reality is very different, and the snakes agonize several weeks, after their fangs are taken out with pliers, with their head inflamed because of the sores and the infection, dying shortly after and being replaced by other captured in the wild. This has greatly reduced the populations of both species.

If vipers normaly have bad press, Bitis arietans is suposed to be the snake that more human deaths produces in África, although they are no oficial statistics, and in many countries they are no statistics at all.